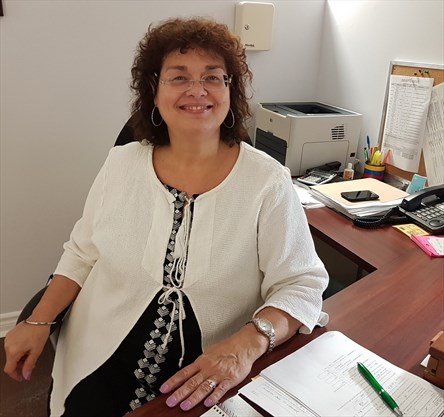 Gail Logan is a new executive director at the helm of Big Brothers Big Sisters of Lanark County, and she has hit the ground running.

“I’m thrilled to be selected to lead this exceptional organization and look forward to meeting volunteers and stakeholders in the coming months,” she said Friday, July 20, after her first full week in her new position. “I’m thankful of the confidence of the board to hire me, and I’m excited to go out and shout about BBBS (Big Brothers Big Sisters).”

There were 35 applications received by the board, according to chair Sue Cavanaugh. “Gail has worked primarily in the charitable and not-for-profit sector throughout her very successful career and is an award-winning association professional (who) will bring new ideas for growth in programming and revenues to BBBSLC,” she said.

Logan said she’s appreciative of former executive director Jennifer Miller’s help in getting transitioned into her new position. “She has assembled a very dedicated and competent volunteer and staff team and we will continue to build on her successes; doing great things for children and youth in Lanark County,” Logan said.

“The two are really intertwined. I want to look at our capacity for growth and I want to work with our staff … and fundraise around that.”

Logan said she’s looking at changing the fundraising language to something more all-encompassing.

“Instead of going to someone and asking if they’d consider making a major donation to Big Brothers Big Sisters, I would really like to be able to go to them, (and say) ‘Here’s a new program that we want to offer, would you be willing to make a program commitment,’ and that way we can deliver the program. They could get involved in the planning so it becomes as part of their DNA as it is ours,” she said.

Then the next time BBBS seeks funding may be easier, as donors become more involved in the process and programming, and they want to stay involved and connected, Logan explained.

“We welcome donations at any time, but to really take advantage of sources that are out there, they have to know about us, and if (donating) meets their corporate responsibility over their own desire, it’s longer lasting.”

If people wonder why they should support BBBS, Logan said she could give them a litany of reasons, but “I want to ask, what inspires you, what excited you in the community, or what gives you goosebumps when you donate or you see something that you really like?”

This way, Logan said, she’d have a better understanding from potential donors if they are the right fit for each other’s needs.

“We want them to be just as passionate and as excited about Big Brothers Big Sisters as we are,” she said. “That’s my approach … and it will come with understanding of what the gaps are, and what our capacity for growth is. For specific opportunities we can create long-lasting partnerships.”

She will discover this by working with her team, and currently, she’s having one-on-one visits with them.

ON THE PERSONAL SIDE

Logan and her husband, Warren McMeekin, who is the executive director at the Lanark Highlands Youth Centre, have a lake home in Lanark Highlands where they have lived for the past dozen years. She said she doesn’t mind the scenic commute to Smiths Falls, as she is used to driving to Ottawa.

She has worked for the United Way Ottawa and Renfrew County, as well as various chambers of commerce and tourism bureaus throughout Ontario. Hailing from Burlington, Logan retired from the Ottawa Chamber of Commerce in 1997. She and her husband, a 30-year scout leader, started a consulting business, Changes R Us, specializing in services for not-for-profits and charities.

Logan has fundraised for Carleton University, OneChange, and Habitat for Humanity in the National Capital Region, and the Canadian Pain Summit.

Logan has a son Greg, who is in information technology in Ottawa, and Miney has two sons: James who is in health care in Toronto, and Michael, who is in the music industry and lives in Fredericton, NB. All three young men are in their 20s.

“We are all getting together over the long weekend in August,” she said, referring to their sons, girlfriends, and friends of the family.

Logan and McKeekin have been married four years, Aug. 3 and following their wedding, which happened at their property, they jumped in the lake — literally. “That’s just us,” she said. “We’re pretty laid back people, and we love to have fun. We’re really looking forward to having everybody here,” she said. “It will be very relaxed.”

Together, the couple enjoys music, summer fun on the water, their pets (two chocolate labs and a pair of tabby cats), and riding motorcycles.

Logan said her door at BBBS is always open, and she welcomes input from the community.

“I can’t wait to get out into the community,” she said. “I am just so thrilled to be here.”

Laurie Weir is a news editor at Metroland Media, including The Perth Courier, Smiths Falls Record News and regionally for The Carleton Place Almonte Canadian Gazette and the Kemptville Advance. Follow her on Twitter @InOttValley or find her on Facebook at any of the publications listed.

The first BiggerTogether 50/50 Winner is

Virtual After School Program on Monday Nights from 4-5pm.

Please help us by completing this survey about After School Programs

Ladies Night at our Perth Jewels

Live Interview May 7th for Golf for Kids Sake