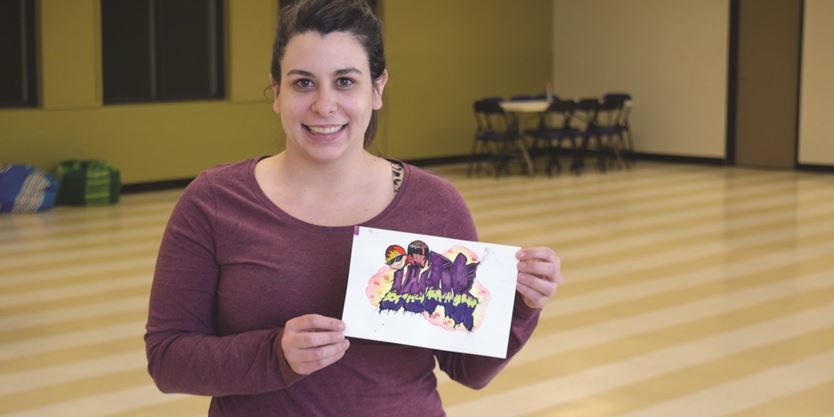 Bridget Manahan, manager of youth services, with Big Brothers Big Sisters of Lanark County. Pictured here, Manahan holds up the new We Are Kids (WAK) logo – created by the youth and program staff at the Smiths Falls after-school program hosted at the Youth Arena. – Evelyn Harford/Metroland

Well you know how the saying goes: when life gives you lemons, make lemonade.

Big Brothers Big Sisters of Lanark County (BBBSLC), YAK Youth Services in Perth, and the Town of Smiths Falls all came together to help fill a void left by the youth centre’s closure.

Thanks to the leadership triad the new after-school program has been running since last October out of Smiths Falls’ Youth Arena in space donated by the town.

BBBSLC executive director, Jennifer Miller, said that when the old youth centre closed there was an opportunity to analyze what youth services there were, and what services are needed.

Miller said there was acknowledgement that the after-school program needed to be something bigger than focusing on a targeted set of youth.

“Whether it’s my daughter, or my little sister through Big Brothers Big Sisters, kids that are struggling with social or economic issues — it’s a safe place for everybody,” said Miller. “We needed to be something for every kid — kids that struggle, kids that succeed, kids that just need a safe space to go.”

And, that’s what they’ve created.

The after-school program runs five nights a week, working with youth in the “critical hours” for teens. The free program serves youth in Grade 7 to 12, aged 12 to 18 in the Smiths Falls area.

There’s a large list of community partners including the Smiths Falls Public Library, the Table, R & J Youth Services, the Smiths Falls police, and Community Justice, who all contribute to programming.

The youth are also able to go on field trips. Two activities that stick out for Bridget Manahan, BBBSLC manager of youth services who oversees the after-school programming, was the group’s recent excursion to Xtreme Trampoline Park in Kanata, and their escape room experience at the Railway Museum of Eastern Ontario, where the youth were challenged to work together to escape a boxcar.

“They loved that — they were talking for a week straight about how cool it was,” said Manahan.

The youth also participated in a healthy living week where they learned about moderation when it comes to a healthy, balanced diet.

The programming also challenges youth to look deeper within themselves.

“When we had our bullying and prevention awareness week, they’re very open and honest in expressing what they had witnessed at school and asking questions about how to be a better ally,” said Manahan. “They feel safe here.”

The youth have also had the experience of a youth-led restorative circle facilitated by Lanark County Community Justice.

As self-professed “cool aunt” role model, Manahan said it’s sometimes easier for youth to open up to someone like her.

“I found it so much easier to learn life skills from the ‘cool aunt type’ (when I was younger),” she said.

Youth can feel like they’re alone with their problems, but the program is designed to help build relationships and support networks.

“It helps show them that there are adults in their life who have possibly gone through things that you’re going through,” said Manahan. “It’s nice to help pull those little blinders off them.”

Both Manahan and Miller said they want the youth to feel ownership over the program.

They were consulted about what they would, and wouldn’t like to get out of the program — even what they want to eat for a snack, or cook when the Table Community Food Centre in Perth comes in to do workshops. The program leaders are constantly adjusting the programming to fit the interests and needs of what the youth are asking for.

When asked what the youth wanted, Manahan said they were on par with adults, who wanted a safe, welcoming and inclusive space and just somewhere fun to go.

“So, we incorporated all of that,” she said. “There’s absolutely no bullying, no name calling, none of those types of things.”

In January, the group did “Workouts with Heidi.” Heidi McNeely is one of the youth after school program facilitators, who enjoys promoting a healthy lifestyle, and the youth who discovered that wanted to be involved.

“It was well-received,” said Manahan. “We laughed and we joked around.”

Another of the program’s facilitators is Ashley Rankie, who has an artistic background, so the youth do “Art with Ashley.” They get basic drawing instruction, but if they just want to doodle that’s fine, as program staff will give them guidance as they need.

“I think that makes it so they’re more eager to come to the program because it’s part them — even with naming the program,” said Manahan.

The youth were able, with Ashley’s leadership, to design and create a logo for the youth program that they named themselves — We Are Kids (WAK) Youth Services.

The youth submitted program name ideas, and voted on the one they wanted.

“They even helped pick the paint colours, everything about it,” said Manahan. “It truly is their program.”

Manahan said she’s already heard some positive feedback from the youth, thankful that the program exists.

“It makes you feel like you’ve done the right thing,” said Miller of the positive feedback.

“It warms my heart,” echoed Manahan. “It tells me that I’m doing something good, and that I need to continue.”

BBBSLC has been around for about 45 years, and have done after-school programming for the last five years.

Miller said this is the organization’s first leap into youth services.

“We’ve taken the core of who we are, a good program delivered, and implemented something that feels like us in a less traditional way,” she said. “It’s been a good fit.”

The program has maintained BBBS’ high supervision rate — one adult to four kids.

Miller thanked Lanark County, and the province’s Ministry of Tourism, Culture and Sport, for their funding — and all of the programs partners — for helping make the first steps possible.

Right now, Miller said the group is just trying to get their feet firmly planted on the ground — but dreams for what this program could be are big including the formation of a “one-door” model where youth can access a variety of services through one program and space.

“The ultimate goal is to create a youth campus on this site,” she said. “We’re in the right place for that — making a program that is geared toward a physically active young people.”

The Youth Arena, where the programming takes place, is adjacent to a ball field, a skate park, part of a facility with an arena, and next to an unused tennis club house that Miller said they might explore the possibility of renovating to create a space for youth programming.

“Maybe there’s an opportunity for doing other work to the property to make it more youth-friendly,” she said. “The big picture is really big. But in terms of the next 12 months it’s getting more kids.

“My goal is to continue growing the awareness and keep getting more and more youth out,” she said. “I just want them to know about the services and use them.”

Miller’s dream for here is to walk through the door and see 20 or 30 kids every night at the program — something they’re on track to accomplish.

If you would like more information visit BBBSLC online at https://lanark.bigbrothersbigsisters.ca/.

Evelyn Harford is the reporter for the Smiths Falls Record News. She can be reached at eharford@metroland.com.

The first BiggerTogether 50/50 Winner is

Virtual After School Program on Monday Nights from 4-5pm.

Please help us by completing this survey about After School Programs

Ladies Night at our Perth Jewels

Live Interview May 7th for Golf for Kids Sake